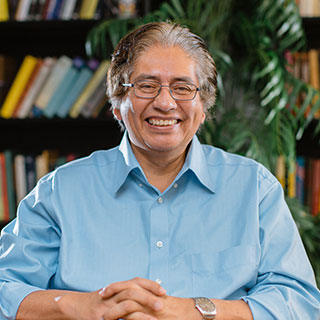 The Comisión Gestora (CG) would like to introduce Professor Carlos Castillo-Chavez, Ph.D. who will serve as Yachay Tech’s new Rector effective immediately.

Professor Castillo-Chavez is a Distinguished Mexican-American Mathematician, Scientist, Social Scientist and Social Activist who has had a luminous career in the USA where he has held multiple distinguished Professorships and Center Directorships. Most recently he has served as the “Regents Professor, and Joaquin  Bustoz Jr. Professor, of Mathematical Biology” at  Arizona State University, where he was also named Director of The Simon A. Levin Center of Mathematical, Computational and Modeling Sciences,  Director of the Mathematical and Theoretical Biology Institute and Director of the  Institute for Strengthening the Understanding of Mathematics and Science.

His research and teaching work is remarkably interdisciplinary and lies at the interface of the mathematical, natural, and social sciences with emphasis on (i) dynamic social landscapes on disease dispersal, (ii) the interplay between host behavior and disease evolution, and (iii) the impact of human behavior in relation to environmental and social structures on the dynamics of addiction. Specifically, he has been involved in the mathematical study of the spread, control, transition dynamics and social consequences of diseases such as influenza, HIV, Tuberculosis, rotavirus, pneumonia and rubella and he has also modeled the impact of emergent or re-emergent diseases like Ebola, SARS and Zika.  As a matter of fact he is considered by the international scientific community as one of the pioneers of the field of “ Mathematical Biology”. He has authored 250 publications including a dozen books, textbooks, research monographs and edited volumes.

Professor Castillo-Chavez is the true epitome of the “Social Activist-Scientist” and has focused all of his scientific activities in studying problems that can help humanity combat disease and has provided solutions that improve living conditions for millions around the world. On February 24, 2016, the University Francisco Gavidia in the Republic of El Salvador inaugurated a research Center in his name. The Centro de Modelaje Matemático Carlos Castillo-Chavez, in the city of San Salvador, is only one example of his international recognition as both a scientist and an activist in the service of humanity.

In the United States Professor Castillo-Chavez has also been extremely successful in inspiring new generations of Hispanic Scientists, of both genders, in all fields of Physical, Biological, Chemical and Social Sciences.  Indeed he has been recognized by many to be the intellectual leader and one of the most distinguished  “role model” of the, US-based community of Hispanic Scientists and Engineers. In recognition of this inspiring role, he has received multiple awards and recognitions from Educational Societies as well as from the Whitehouse and President Obama himself, who appointed him a member the prestigious committee for the “National Medal of Science”.

The CG is delighted that Yachay Tech’s unique vision continues to attract luminary scientists of the caliber and international impact of Professor Castillo-Chavez as it enters the next phase of its scholarly growth and achievement.