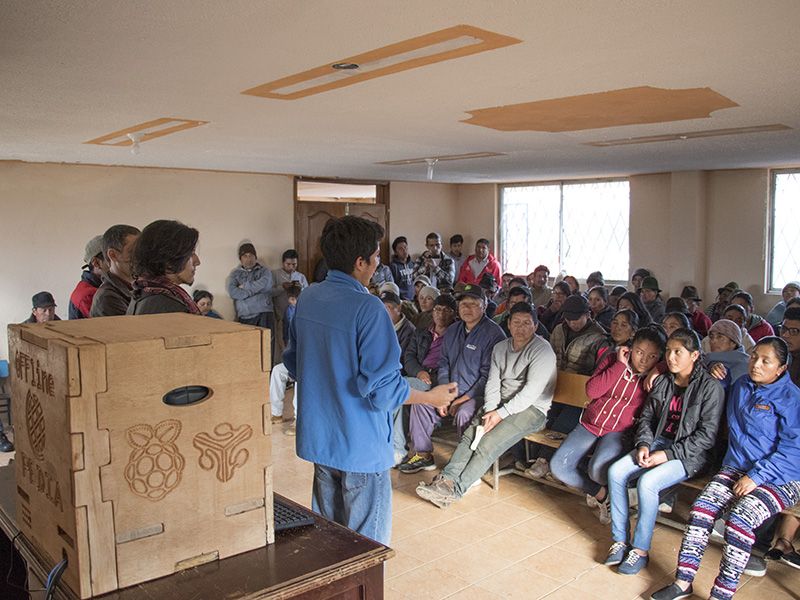 Offline-Pedias are done with open software and recycled hardware.

On April 30, 2018, in a community called Cajas Jurídico, located in the line that separates Pichincha from Imbabura, a team of Yachay Tech students and faculty delivered the first Offline-Pedia prototype for the community to use. Offline-Pedia is a digital encyclopedia that gathers all the content from Wikipedia and the Gutenberg Project so that people can have access to it without internet connection. Joshua Salazar and Jorge Vega, Physics major students of Yachay Tech University, began the project in late 2017. Then Sergio Minnity, professor of the School of Mathematical Sciences and Information Technology joined them and provided them with new perspectives and funding.

For Joshua, it all began way back, even before he entered the University. He was still attending high school in Quito when he learned that there was a possibility to download all this information so that you could have access to it without having internet. For him, this was amazing, since he attended a school in a rural area where there was no internet access. After a couple of years, he decided to begin a project that would give rural institutions access to this content. The knowledge he gained in the University helped in the creation of the first prototype.

To improve the development of the project, Joshua decided to get Jorge Vega involved, another Physics major student. Jorge has experience working in communities and leads a project that involves science talks, experiments and workshops for kids and youth in rural areas. It was him who first got in touch with the first community that received the Offline-Pedia prototype.

Before delivering the prototype in Cajas Jurídico, both students had to work on it. They did so with the help of Sergio Minnity, Professor of the School of Mathematical Sciences and Information Technology, who has experience in prototyping and innovation. Sergio funded the first prototype, for which the students had to find a reduced-size Raspberry Pi computer, a large-capacity memory card, an unused television and a keyboard. Most of the devices were used, whereas the TV and the keyboard were donated.

Now the Offline-Pedia team hopes to deliver 4 more prototypes this year, all funded by the team’s own means.  In order to keep on growing, the team decided to make their project known internationally. At first, they will do so through a paper focused on the use of recycled TVs, a national patent, and by presenting their project at international meetings. For the latter, they have already planned a visit to Italy in June to participate in a conference.