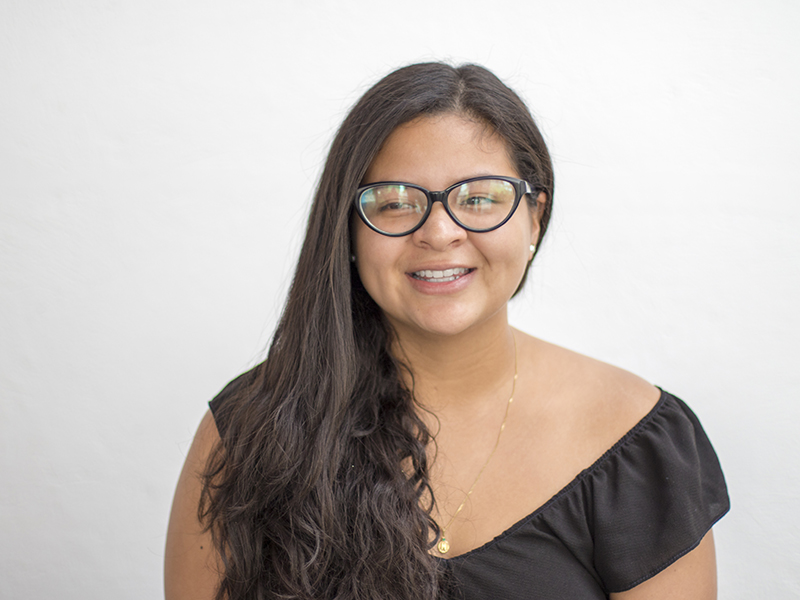 We spoke with María José Aldaz, a Biomedicine major from Guayaquil who studies the expression of histone genes in the Chlamydomonas algae.

María José Aldaz comments that she arrived at Yachay Tech out of pure luck. Despite being in the tenth semester of her undergraduate studies, she still talks about it as something new and exciting. She is a Biomedicine major and works on the study of histone genes in the Chlamydomonas algae. She hopes to study a master’s degree.

When she graduated from high school she didn’t know what to study. In fact, that’s why she applied to Yachay Tech. The University’s common core gave her the opportunity to decide later. She was also attracted by the idea of a new institution. “To take the plunge” was her way to describe it. Actually, it felt like a risk.

María José remembers that the first semesters were the most difficult. “In second semester I thought I wasn’t going to make it, I thought: I don’t know how I’m going to finish this”. The hardest thing for her was to get used to change, to be far from home and her hometown. However, she is almost done with her undergraduate degree.

Although she thought about choosing Nanotechnology, she went for Biomedicine because she’d always had an inclination towards medical research. For her thesis project, she works with Chlamydomonas studying the algae genome distribution. In addition, she is looking for sequence promoters in these genes that will allow her in the near future to express a specific gene more times. All of these analyses are In sílico, which means that they are carried out through computer simulation.

The DNA not only swims inside the cell but it forms chromatin, a complex system with other proteins called histones. These proteins pack the DNA and allow the information contained in it to be organized within the nucleus. But this means that in order for a gene to express itself, you have to unpack it. This is why the cell created a dispersion control system that regulates the gene packing and unpacking. Then, if the cell “does not want” a gene to express itself, the cell packs it. If the cell “wants” this gene to consistently express itself, it does not pack it. Through this process, María José hopes that in the future one gene can express itself more than another.

Her tutor at Yachay Tech is Fernando Gonzáles, Ph.D., but she is also working in the project with the support of Armando Casas, Ph.D., former Yachay Tech professor. Once she finishes her thesis and obtains her undergraduate degree she would like to do a master’s degree abroad.