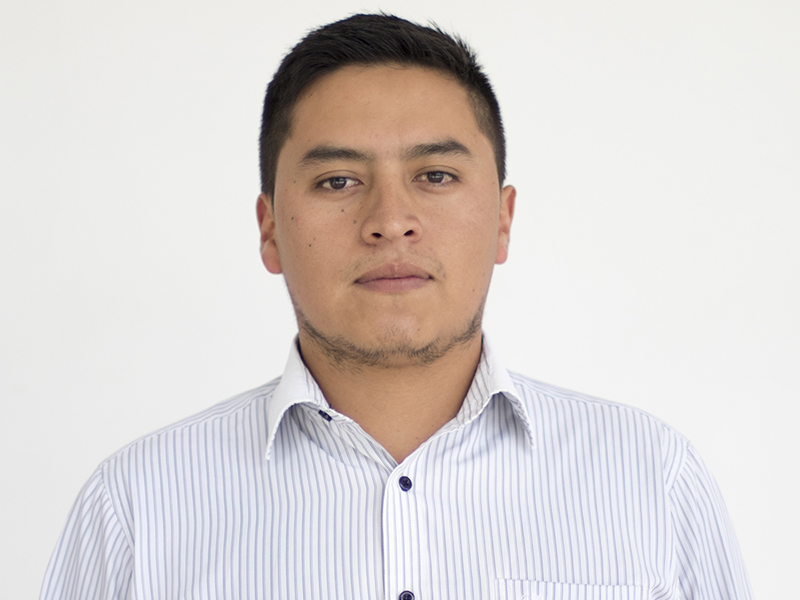 We spoke with Alex Imba, a Mathematics major from Tabacundo who studies a system of partial differential equations that models the interaction of cold air at high latitudes, with hot air at low latitudes.

When Alex Imba came to Yachay Tech he was in love with science, or what he believed science was. ‘I didn’t know what science was – he admits laughing – but I liked to study and learn, that’s why I came here’. For him, the experience was a little difficult at first, when he had to leave home and go away from all his friends and family, but he recognizes that he adapted very easily because he met extraordinary people. He remembers that when he started his classes he realized that it was very demanding, but he never stopped liking studying and learning.

For Alex, the University also provided a space that allowed him to clarify his ideas and the panorama of the path he should follow for his professional life. At the beginning he wanted to study Physics, later he thought about studying Nanotechnology. However, as the semesters went by he chose Mathematics. ‘A Mathematics professor can change your life, the faculty were the ones who inspired me to choose Mathematics and if I had to choose again, I would choose the same,’ he says. He assures that he doesn’t regret it, he likes to learn Mathematics every day and, above all, he likes Applied Mathematics.

This is why his thesis project is about the study of a system of partial differential equations that models the interaction of cold air at high latitudes, with hot air at low latitudes. Alex and the professor from the School of Mathematical and Computational Sciences, Juan Carlos López, Ph.D., study (mathematically) if the state of the speed and the temperature of the system can be predicted at any time.

This system of equations has many physical applications, in atmospheric sciences and even in climatological predictions. However, the team studies it mathematically. They showed that, if there are appropriate initial conditions, (appropriate initial speed and temperature), then you can predict exactly what is going to happen with the temperature and with the speed at any time, even after one, two or three hours. In the future, the team intends to make a numerical analysis of the system.

Once the research is finished, Alex would like to get a master’s degree in Applied Mathematics or Mathematical Physics. Subsequently, he hopes to be able to join a doctoral program.