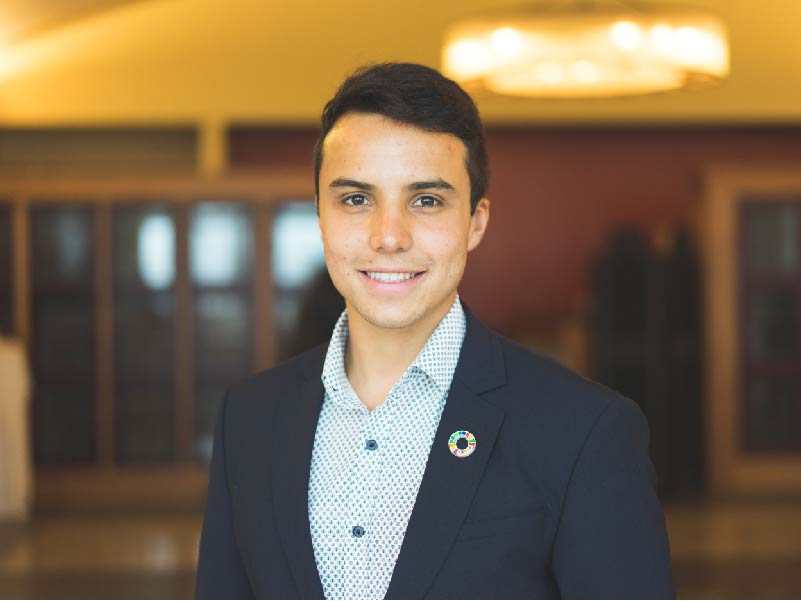 When Nicolás Serrano applied at Yachay Tech, he knew exactly which major he would choose: Information Technology. Although his stepfather was the one who taught him how to use computers, he believes it was his father’s genes that pushed him to choose this career. Aside from his major, he is involved in several activities that allow him to perform activities outside the classroom.

Nicolás is a member of the University Student Council and the General Secretary of the SDSN Youth Andes, a branch of the United Nations. His work is to promote and measure compliance with the Sustainable Development Objectives (ODS) that the UN established in 2015. In this context, he has developed projects with different team works. These projects are related to sustainable development, like the Chamanga project and others related to the promotion of the ODS. He has also been volunteering with TECHO since 2014, but it hasn’t been possible to establish a permanent institutional collaboration yet.

Chamanga is a relatively small and inexpensive recycling machine that can be used at home to recycle at a daily consumption scale. When the project started, the team, which was directed by Nicolas, sought to provide a business model for Chamanga, as it was heavily affected by the earthquake in the Ecuadorian coast in 2016. Since then, Nicolas is constantly dedicated to sustainable development.

This semester, the Chamanga project has the key collaboration of Maria José De la Torre, Ivan Chavez, Ruben Pazmiño, Brandon Quito, Ismael Villegas and Jhonny Caicho. Chamanga seeks to begin with the research work on materials presented in their proposal for an internal grant already approved. In order to accomplish this, they have asked the university community to help them in a simple way: by handing in their trash. They can do something that many plastic processing plants refuse to do: recycle icopor (the material that disposable plates and containers are usually made of.)

Nicolás says that he finds it hard to put all his projects together. He hasn’t found a way to link his community and sustainable development work with his major, but he hopes to do so because he is interested and passionate about both things. More than anything, he likes collaboration and sharing to bring about important things.

If you are interested in collaborating with the Chamanga team or with SDSN Youth Andes, please write to nicolas.serrano@sdsnyouth.org.